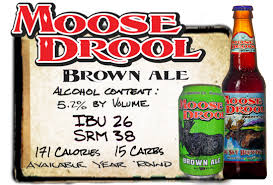 Our Beer Blog this week is about Moose Drool Brown Ale, from Big Sky Brewing Company. I tried Moose Drool for the first time this week, and I must say that I was impressed… I stopped in to the Timbers on North Rancho a few days ago and noticed an interesting looking handle on one of the draft beers. It was wooden, with a picture of a moose standing by a stream. The name was very intriguing to me…. Moose Drool Brown Ale. My curiosity piqued, I decided to try this interesting looking beer and learn about it too.

Moose Drool Brown Ale comes from Big Sky Brewing Company in Missoula, Montana. Created in the mid-1990’s by two home-brewers from Michigan and a Missoula native, these 3 men shared the same passion for English-style ales and wanted their brewery to specialize in making them. Their very first beer was Whistle Pig Red Ale, which was released in July of 1995, followed by Moose Drool Brown Ale and Scape Goat Pale Ale shortly thereafter. They kept cranking out these tasty brews over the next 5 years, but didn’t really gain much popularity until 2003, when Big Sky opened their second brewery. The new location made it possible to bottle and distribute ales across the country, where it can now be found in 24 different states.

One of Big Sky’s more popular ales would be Moose Drool. This American brown ale is made with four malts and hops – including East Kent Goldings, Willamette, and Liberty. With its darker chestnut coloring, Moose Drool may look like it would be very rich, but it is surprisingly light and subtle on the palate. With the right balance of hops and malt, and a nice sweet grain character, this beer was definitely made the right way. 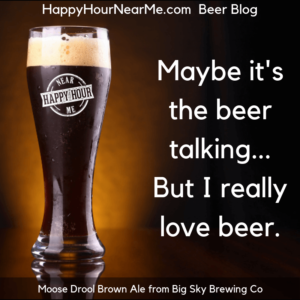 When pouring a glass of Moose Drool, the first thing you notice is the light foamy head, with light lacing on the glass once the pour has settled. The flavor profile includes notes of coffee, caramel, and chocolate, with hints of spice. Once I was near the end of my first glass, I noted another aroma of earthy malt.

Alcohol by volume is 5.2%, with 171 calories and 15 carbs per bottle. Moose Drool is available on tap, bottle and in can year-round. If you enjoy medium/lighter ales with a less hop flavor, this is a great one to try out.

You can find it at the following locations:

Back to News
Find a Happy Hour
Upcoming Events