The idea for opening a bar and calling it Hogs & Heifers Downtown was conceived in, of all places, a bar.  Allan Dell, a self-proclaimed functioning alcoholic, figured he spent enough time sitting at a bar and that he might as well make some money while he sat there. Allan’s two friends and drinking buddies, were a Master Carpenter and a Graphic Design Artist. He talked them into helping him build a bar. They would all drink for free, get laid regularly and for three broke guys in their early to mid twenties, who could ask for anything more.

Allan’s father agreed to finance his project as long as he could find an experienced bar owner to “father” him in the business. Enter Tom McNeil, legend in the Dive Bar business. McNeil owned the Village Idiot in Manhattan’s East Side. Which was the Boys’ favorite watering hole, where they could sit for hours drinking ice cold Pabst Blue Ribbon for a $1.75 a can. Allan knew that he wanted to open a bar that had to do with motorcycles and women and the original logo did, in fact, include an illustration of a chopper.

The Boys were trying to come up with a name, while sitting in the Village Idiot one afternoon…”Hogs & something”. On the wall above the bar was a sign for a Heifer Auction, and a heifer being a cow that has not yet been bred, is essentially a virgin cow. The name Hogs & Heifers Downtown was born. The fact that the bar ended up being in a real meat market was simply due to the affordable rent at the time, but it was a perfect match and had a great deal to do with the success of the business.

Check out the bartenders by clicking here!

To go back to the map locator page, Click Here. 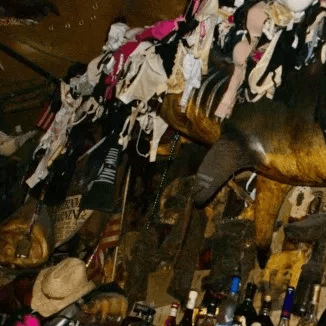 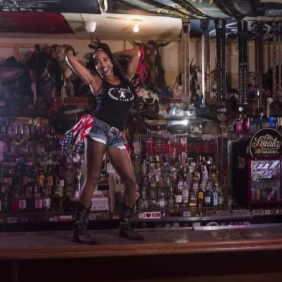 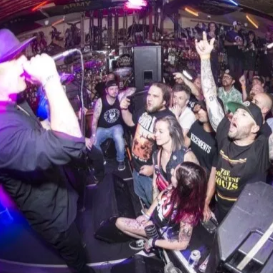